It is known that Japan has a relatively high suicide rate. According to nippon.com, as of 2015, although the number of people who commit suicide has been decreasing since 2009, the suicide rate (suicides per 100,000 people) was 18.9 and still the second highest among the eight major industrialized nations following Russia at 22.4.

I think this is one of the major issues in Japan and needs to be dealt with, but how? In order to find it out, we need to understand who tends to take his/her own life. Since the media in Japan often reports suicides among young people due to overwork, harassment, and bullying in school, etc., I was expecting to see a graph which showed that young people were committing more suicides that the elderly. I was also expecting to see that the recent decrease in suicides was due to improvements in workplaces and schools, but I was wrong. 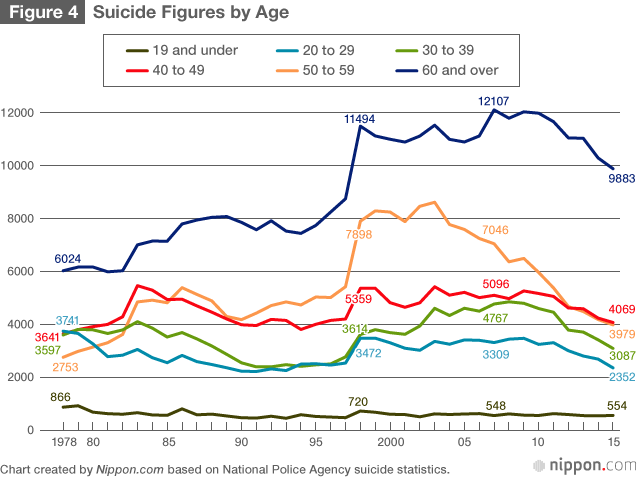 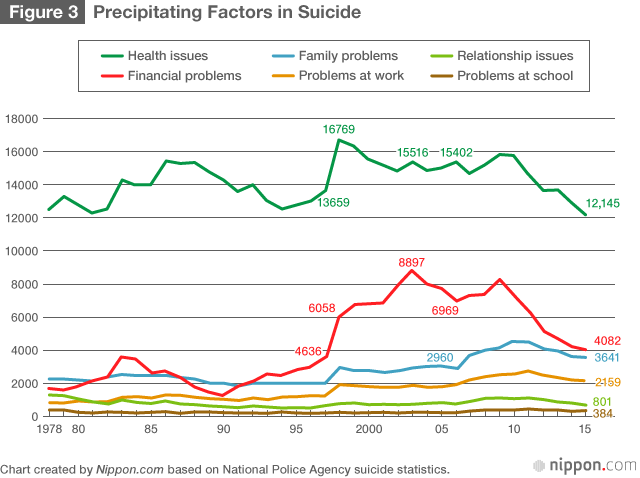 The top precipitating factor is health issues. The figure is about three times as big as financial problems, which ranked second. This makes sense because about 40% of people who took their own lives in 2015 were 60 years old or older, and so they might have had some kind of health problems.

The Japanese government’s 2016 white paper on suicide prevention suggests the recent decrease in suicides may be caused by the improvement in medical treatment and enhancement of the health consultation system. It also suggests that the economic improvement in Japan has also helped lower the figure since financial problems are second highest reason.

Oh, wait….what about the suicide rate among young people? Have workplaces and schools become better places? Unfortunately, they have not changed much. Let’s go back to the second graph.

I know it is important to develop better medicines and treatments to prevent suicide among the elderly, but it is also important to find ways to improve our working and school environments so that we can decrease the number of suicides among the young. This is quite important because they are the ones who are working and paying taxes. If we don’t have enough workers, it is impossible to maintain our society.

Due to the low birthrate in Japan, the government has tried to recruit more foreigner workers to Japan, but this policy is controversial since it may result in an increase in the number of illegal immigrants. So here is my idea: why don’t we spend more money improving our working and school environments instead of on recruiting more foreign workers. Then, we can decrease the suicide rate in Japan AND don’t need to worry about any problems caused by recruiting more foreigners. What do you think?

Hi! I am Takuya Fujii. I teach English at a college in Japan.
I have published more than 10 English textbooks. (You can see some of them here. )
On this blog, I will mainly write about what I see in Japan from the viewpoint of a returnee from America.
If you have any questions, let me know! Thanks!
【twitter】@gachitore1
【email address】gachitore%gmail.com (% → @）